There was once a crab playing maracas

A while a go we at Plug & Boom started working on a game about a Mexican crab fighting pollution at the bottom of the sea. As we worked on it, we fell in love with our Mexican character, so we decided to make a whole series of games inspired by the Mexico from old wild west movies!

The first of these games to be published is a 2D runner for tablets and cell phones. The main character is a fish that swims at the bottom of the sea, dodging enemies on his way and using the powers of the Jalapeño pepper!

For this game we are not only looking for inspiration on  the Mexico of old John Wayne moveis, but also on ancient Maias and Aztecs, and all the misticism that surrounds them. It’s from ancient magic that comes the powers of the Jalapeño, able to transform anyone into a fire breathing DRAGON!

Want to know more about our new game? Leave us a message here on our blog! And don’t miss our post next week! 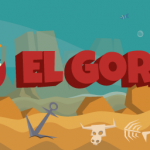