Watch out for the Cicloctopus

Having an advanced intellect, the octopusses of Octoland developed psychic powers that allow them to levitate rocks with their minds, shot lasers from their eyes and even a minor hypnosis, that causes their enemies to get disoriented.

The Ciclcoctopus is the larger of all the octopusses, and a master in the use of lasers.

In just a few seconds he is able to aim and shot a powerful laser blast that is deadly to any foe.

He also has the power to summon projections of his eyes outside his body, and use those to create laser fields that work as barriers in his enemies path.

While concentrated to summon a laser field the Cicloctopus protects himself by creating a cristal like barrier around him, that is able to deflect any incoming attack.

Do you have what it takes to defeat this fearsome enemy? Face him at the last level of Octoland, Chili Mariachi’s second world! 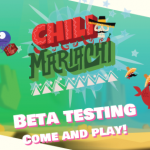 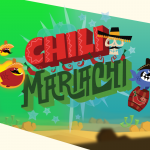 We are soft launching Chili Mariachi in Brazil