Do, re, mi, fa, sol, la, si… Almost every on knows the musical notes, right? How about we get to know some of its history?

Nowadays we call the notes by the names created in the Eleventh century, by the benedictine monk Guido d’Arezzo, also responsible for the defining the position of the notes on the musical staff.

All the names come from the first syllables of the verses of the hymn  Ut queant laxis, dedicated to Saint John Baptist: 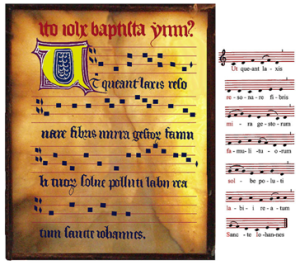 UT was replaced by DO becaus it didn’t end on a vocal and was harder to sing. SI comes from the first two world of Sancte Iohannes.

The musical notes work as a sort of “alphabet” for musical language. Knowing all their names and sequences, both ascending (do re mi fa sol la si) and descending (do si la sol fa mi re) are of great importance in the reading and writing of music.

The musical staff came to be during the middle ages,initially, composed of a single line placed over the music lyrics. The distance between the notes and this single line would tell the musician how high was the note (pitch). Just by imagining it we can already notice that this system wasn’t really accurate, so it slowly evolved to a system with four lines, or tetragram, as shown in the illustration of the Hymn to Saint John Baptist. The musical staff used today is an evolution of this model, with a fifth line, giving it the name of pentagram.

On the staff, notes can be positioned over the lines or in the blank spaces between them. Notes with a pitch too high or too low can be represented with the use of supplementary lines, below and above the staff.

The clefs at the beginning of the staff are used to define the names of the notes on each position of the staff. On Chili Crab – The Musical Notes we use the most common clef, called TREBLE CLEF, depicted in the picture above.

Cool right? I sure didn’t know all that before we started working on Chili Crab! 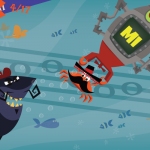 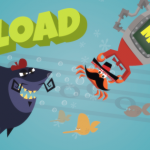