We are getting close to Chili Crab e as notas musicais release date! Only three weeks left! Get a look at how the game is already looking like:

But that’s not all we have been working with! Last week, at March 11th, happened in Belo Horizonte the second edition of MIND, where we showed off to players and other indie developers a little bit about Chili Mariachi, Nicebergs and, for the first time, a demo of Chilicrab e as notas musicais!

We also showed a small teaser for a new mini game we have been woriking on, so far called Go Go Goblins!

On Go Go Goblins! the player takes control of a group of goblins trying to carry their king, a fat and round goblin, over a shield. The goal is to move as far as you can without dropping the goblin king, and you do that by changing how much each side of the shield is lift of the ground.

Since the game is not yet ready to be shown, the teaser shows ofe some character of the game and a music with the goblins  singing as the user clicked over them.

Why don’t you enjoy some of the goblins music too?

Have a nice weekend! 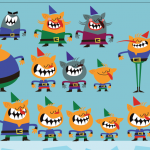 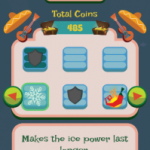